I’m Fat. Sooo… All I Care About is That I’m Not Fuckable? 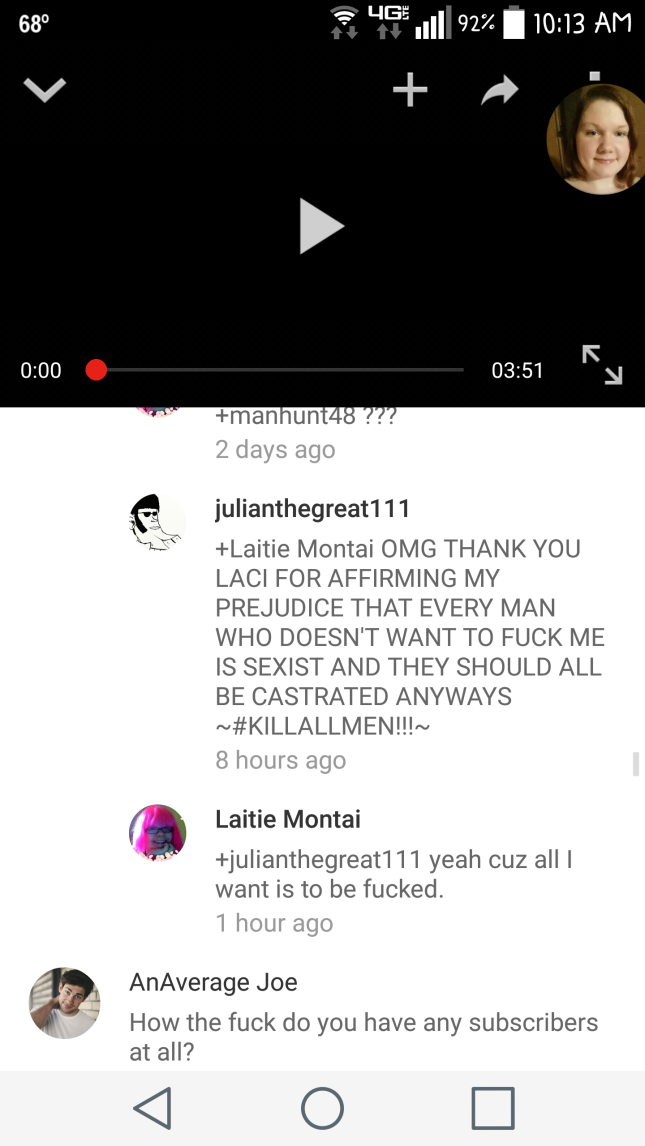 Remember that “comedian” chick that “made fun of” fat people recently? Yeah. So I was browsing Laci Green’s vids, cuz she’s my absolute fave, and was interested in her vid about jokes. I thought it was only gonna be about rape jokes. But she mentions fat jokes and talks about all offensive jokes as a whole. I was ecstatic.

I’m fat. Ever since puberty hit, I’ve been fat. So my fave youtuber ever made a response, though not directly, to all those fat shamers. I wrote a comment thanking her for making the vid. I mentioned that I was a fat woman. A couple days later, I see a response to my comment. It’s the comment you see in the screenshot above. If you don’t remember what he said, please take a second to re-read it.

There are so many reasons this asshole is an idiot. First of all, he assumes that my problem with my weight (if I had one, hows he to know?) is solely the fact that men don’t find me attractive. Before my bf came around, that was only a small part of the problem. Very small. Like, before I met LR, I figured guys who judged me on my weight were at a loss. Cuz I already knew I’d be a great partner.

Then he thinks that all I care about is being fucked by men. What if I was bi or gay? But I’m not so I’ll just leave that.

As it happens, I’m very uncomfortable with sex. So the idea that I crave to be fucked by every guy in the whole world is kinda contradicting.

Also, as it happens, I do have a boyfriend who fucks me whenever we get the chance. Why would I want to be fucked by anyone else? Especially considering my boyfriend is intelligent enough to know that what’s inside my fat body is a million times more important. And evolved enough to love what’s inside my fat body a million times more than said fat body. So, again, why would I want anyone else to fuck me?

Finally, he seems to think I want to kill or castrate all men. That’s kinda a stupid belief, because doing so would kinda ruin the whole reproduction and species survival things :/…

Anyway, where did he get all these assumptions about me? Because all I did was inform Laci that I’m fat and, as a fat woman, really appreciate the video.

Posted by LaceyAnne on September 22, 2015 in Uncategorized